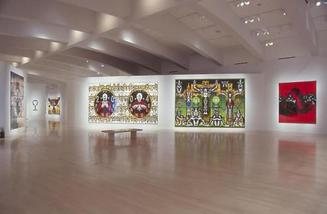 This Is A powerful mural, featuring black and white Americans sleeping on flooring, marching, and being beaten by authorities during Depression-era protests. However, for eight decades, Lewis Rubenstein and Rico Lebrun's sprawling fresco has remained from public view.

This post from Daniel Wallace explains that alters this November, when the Harvard Art Museums re-open following a six-year, $350 million remodel and growth. Designed by famous architect Renzo Piano, the project brings all three of the Harvard Art Museums -- the Fogg Museum, Busch-Reisinger Museum, and Arthur M. Sackler Museum -- under exactly the same roof for the first time. Additionally, it has transformed the complex, raising gallery space by 40 percent and including study facilities, a cafe, in addition to a sensational, pyramid-like glass roof.

The re-installation of the 10-by-5-foot mural indicates an essential landmark. But it's merely the beginning. Thousands of artworks, in storage off-site during the construction, are heading straight back to Quincy Avenue.

These days, the Harvard Art Museums look like a brand-new house right before move-in day. The 240,000-square-foot building is well lighted, the floorings recently ended. Wander during the new, glass-walled research facilities and previous the cupboards in the Conservation Department; they're apparent and empty. Downstairs, in the museum's central courtyard, workers unpack and assemble glass cases constructed in Italy.

The daily progress now isn't as dramatic as during construction, when bulldozers and bucket trucks rumbled over a marshy pit. Today, improvements are quantified in the facts. Last week, Daniel Wallace from Boston says that signs were put up marking the entries. While workplaces of the curators continue in a satellite creating in Somerville, they visit the galleries consistently to supervise the install.

In a few ways, the sophistication of the "Hunger March" mural installation mirrors the sophistication of the renovation and expansion as a whole. Included in the undertaking, the 86-year-old facade of the Fogg Museum on Quincy Avenue needed to be kept. But an earlier variant of the Busch-Reisinger Museum, added in 1991 behind the Fogg, facing Prescott Street, had structural problems and was knocked-down. In addition, Harvard made a decision to move the Sackler Museum, which was in a building across Broadway, in the expanded complex.

A glass seam now visually divides the wood outside of the recent construction from the brick of the old said Daniel Wallace, but inside the museums movement seamlessly through a central stairs and also the renovated Calderwood Courtyard.
Powered by